Little known fact about me: when I first moved to New York City, I wanted to be a rock star.

I had years of singing and dancing under my belt, and was even told by my NYC voice teacher “Yes, you’ve got what it takes.” She had taught many Broadway performers and a top-40 dance hit singer.

The path that led me from that moment to being a coach for entrepreneurs is a long story that I’ll share another time. The punchline is that I had neither the knowledge nor confidence to really pursue singing, and was told by many people that it was too hard and I didn’t have enough experience.

Maybe that’s why I have such a passion for helping new entrepreneurs get started in their business, and more seasoned entrepreneurs to get unstuck so they can grow. It still irks me that I gave up on my talent so easily.

Fast forward 25 years, and I’m now fulfilling my musical passion by singing and playing bluegrass music. I want to share a magically abundant moment I had at a bluegrass festival I went to last weekend.

I had done some late night jamming with people who were performers scheduled to play the next day. They were complimentary about my singing and I fell asleep with a whimsical fantasy: that they would invite me on the stage to sing with them. Never mind that this is incredibly impractical – who would invite someone they barely knew into the middle of a performance?

They were the last act to play on Saturday night. As I listened to them, I was still toying with my little fantasy (never mind that they could not possibly know I was even in the audience). At the very last song, the band leader announced that they would be singing Wagon Wheel and invited anyone who wanted to sing with them to come up on the stage! I wasn’t the only person to jump out of my seat, of course, but I did get in front of a mic!

Here’s a snapshot someone took of me – proof that it all happened. 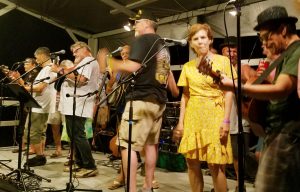 It was a wonderful reminder to dream big, and embrace the moments that my vision is coming to fruition, even if it doesn’t look exactly as I’d imagined.

I’m looking forward to partnering with you to make your dreams come true, whatever shape that takes! Save the date for my next free masterclass for entrepreneurs on Sept. 28 at 1:00 PM EST. More details coming soon!