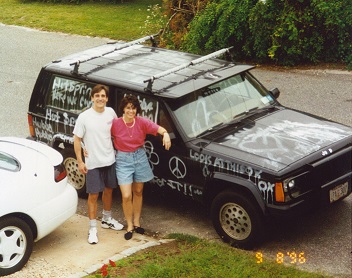 14 Sep I just assumed I would be 40 and divorced

Happy Anniversary to me!  That’s right, I’ve been married to my husband Jon for 21 years as of last week.  That’s a pretty big accomplishment in and of itself, but given my family history, it’s even more astonishing. My parents divorced when I was just 10 years old.  It was a really hard time for not only me but to the whole family, it was an emotional hard journey and a legal one as well, thankfully we got a lot of help from family attorneys that help with all the divorce process. Not only that, but every other adult female in my mother’s family was divorced.  I grew up surrounded by women who were “done wrong” in some way or another by a man, sometimes leading to a wrong path, including anger and violence, so when the authorities were involved sometimes they needed the help of the san antonio criminal attorney for being able to get back in track.

When I imagined what my life would be like when I was in my 40s, I literally pictured myself as a divorced single mom.  I simply didn’t know how to maintain a long term, loving relationship.  Therefore, I didn’t think it was even possible.  The framework I lived in was “you can’t trust men” and I brought that idea with me to every relationship.  No surprises that the men I attracted were, you guessed it, untrustworthy. 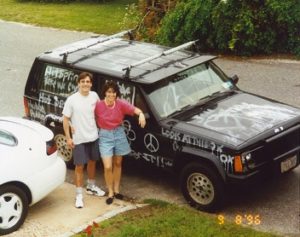 Then in my late 20s I participated in an exercise during a workshop that explored trust.  We did a mingle where we went up other participants and said either “I trust you”, “I don’t trust you”, or “I don’t know if I trust you.”  After the exercise the trainer asked us a series of questions.  One of them was, “How many of you said “I don’t trust you” to all the men?”  My hand shot up in the air.  I must have attracted his attention with my enthusiasm because he looked right at me and said, “Is that true?  You can’t trust all men?”

That was the moment when I realized that as long as I believed that men were not trustworthy like it was the “truth” I was destined for a failed marriage.  Challenging that belief and then eventually shifting it to “Men are trustworthy and available to me” paved the way for me to create a relationship with Jon.

That was just the tip of the iceberg in understanding just how many beliefs I had that were limiting me in my life.  In my business, ideas such as “The only way to succeed is to work day and night” and “You have to know someone to get a break” and “Being successful requires discipline and I’m not disciplined” created hidden barriers that all but stopped me.  Only by challenging each one was I able to create a successful business (which by the way, I started with my husband the year we were married!)

Sometimes our beliefs become so hardened and “real” to us that it is difficult to see it any other way.  If you become aware of a belief that is limiting you, you can begin to shift it by asking the simple question “Is this true?” Most times you’ll be able to see that the answer is no.  If you’re not sure of the answer or it still feels true to you, look around for evidence that defies your belief.  By seeking it out, you’ll loosen the hold that the belief has on you.  In my case, I looked for couples that were happy in their marriage and had been together a long time.  Once I started looking, I found a lot more of them than I expected.

I know that people usually don’t pay much attention to anniversaries unless they’re a “big” one, but I celebrate each year that I’m married as a miracle.  Shout out to my husband Jon for being on the journey with me and being that trustworthy man who showed up at the right time.